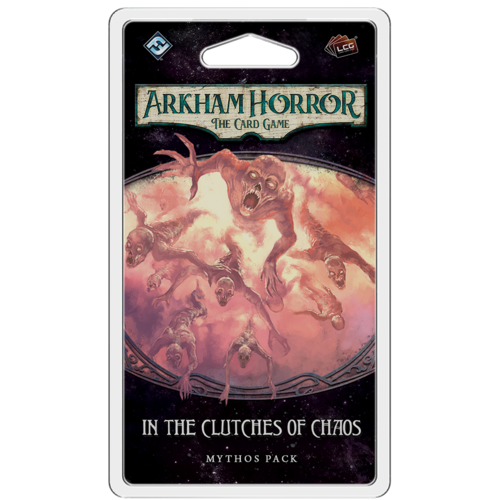 Arkham Horror LCG- In the Clutches of Chaos

Everyone is closed in, safe as possible, waiting for something to happen. Except for you. Always you.
Fifth Mythos Pack in The Circle Undone Cycle. Lees meer

In the Clutches of Chaos is the fifth Mythos Pack in The Circle Undone cycle for Arkham Horror: The Card Game.

After your fateful investigation in Union and Disillusion, the state of the city continues to decay. Breaches in reality begin to rip through the fabric of the Earth, and a faint melody of discordant pipes can be heard throughout the streets of Arkham. Frightened citizens have sealed themselves in their homes, yet you continue to patrol the streets, desperate for some solution to end the chaos.

In In the Clutches of Chaos, doom does not accrue at the usual rate. Instead, breaches are made at various locations, marked by resource tokens. When enough breaches have been made a single location, an incursion occurs. An incursion adds doom to its location and causes the breaches to spread, opening rifts in reality at connecting locations. Your goal is to prevent incursions by removing the breaches that cause them, but this can only be done by activating the action abilities on each location. If you do not maintain control over the breaches, you may soon find yourself overwhelmed with Arkham falling into madness. You cannot allow that to happen!