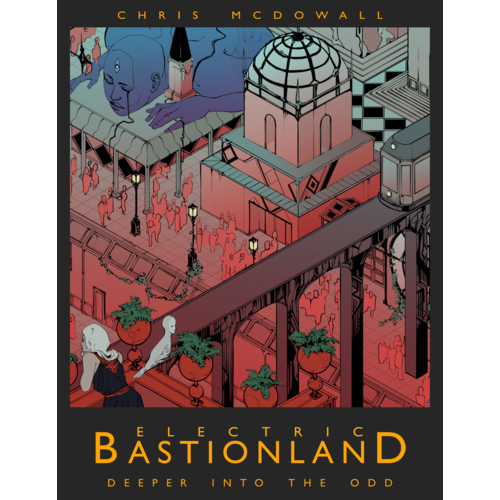 Hunt for treasures to repay your depts in the city of Bastion, the only city that matters in this odd world. Lees meer

Electric Bastionland is the Ennie-Nominated roleplaying game written by Chris McDowall, author of the critically-acclaimed Into the Odd. It uses and expands upon the systems developed in Into the Odd, resulting in a rules-set that’s easy to run and easier to play, a standalone journey into an unknowable world. The system takes the world’s favourite RPG and simplifies it to a minimalist core, where players’ decisions take the spotlight over complicated character sheets.

Bastion is the only city that matters, now entering its electrical age. Each of the characters has a failed career behind them and share a colossal debt. Treasure Hunting is the only spark of hope. Beyond the infinite city of Bastion you might delve into the rural decay of Deep Country or the Underground that sits just below time and space.

The game is simple enough for new players to pick up and fast enough to play a satisfying session in 2-3 hours.