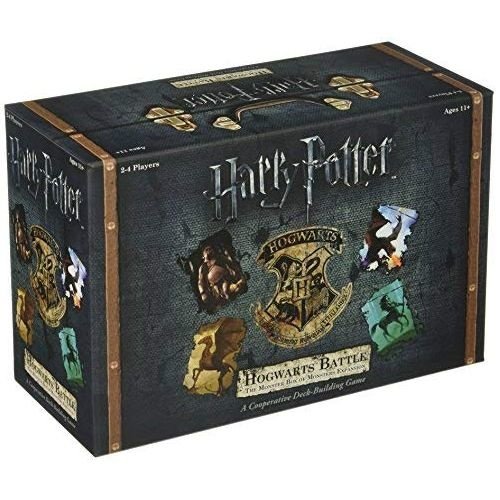 This magical card game allows players to take on the role of one of the brave heroes from the hit franchise, working together using unique starter decks of cards to battle infamous Harry Potter villains and gain better cards to build their decks into a powerful force to be reckoned with.

Play cards and gain Attack and Influence tokens to use to attack Villains and acquire new Spells, Allies and Items to aid you in the fight against evil. As a team you must try and survive the setbacks and damage posed to you by your enemies and their Dark Arts to defeat them before they gain control of key wizarding Locations!

As well as containing over 150 new cards over four progressive game boxes to build on the experience of Harry Potter: Hogwarts Battle, The Monster Box of Monsters expansion introduces great new elements to the gameplay as you delve into the Forbidden Forest to battle magical Creatures and try to beat challenging Encounters in all-new Locations. Aiming to enhance the deck-building experience, this expansion establishes the ability to banish cards from your deck. Beware though, if you misbehave you might end up having to add a dreaded Detention!

The Monster Box of Monsters also introduces Luna Lovegood as a playable Hero, complete with her own starting deck and unique Hero ability. Play as your favourite Quibbler-reading witch alongside Harry, Ron, Hermione or Neville from the original game to protect the wizarding world.

Owners of the original Harry Potter Hogwarts Battle will not only love the increased breadth of options, challenges and modifications this expansion brings to this much-loved game but Potter fans will also appreciate exploring the all-new iconic Spells, Items, Allies and Locations it brings to life.