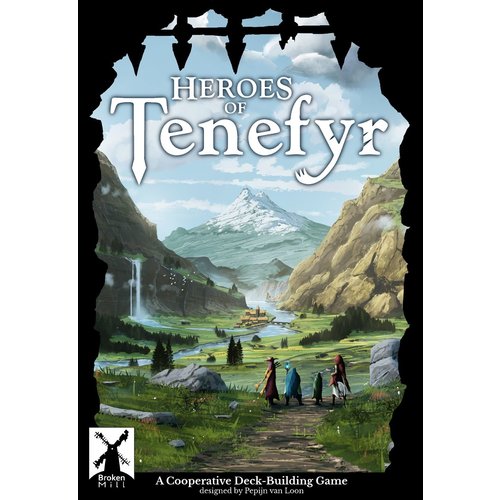 The village of Tenefyr is a bastion of light in a valley surrounded by darkness and countless evil creatures. But the many dungeons that litter the mountainsides aren't the only source of danger. Something more terrible is planning an attack on the village. Will you be one of the heroes that saves Tenefyr?

Heroes of Tenefyr is a fully cooperative deck-building game for 1 to 4 players. You represent one of the four heroes and start out inexperienced, but with a unique skill card. As you fight your way through dungeons filled with evil creatures, you'll gain loot in the form of cards that are added to your starting deck. Clear a dungeon of monsters and you will be rewarded by the villagers.

Players will enter dungeons together and fight the enemies within. Combat is simple, with a combined "push-your-luck" element. Your deck represents your hero's health, so when you run out of cards, your hero becomes exhausted and needs to return to the village to rest. Loot cards that improve your deck are gained from defeating enemies, and the most powerful loot is found in the most dangerous dungeons.

Whenever the heroes leave a dungeon and return to Tenefyr, time passes. When a certain amount of time has passed, depending on the difficulty setting, the boss attacks. If you manage to defeat the boss, everybody wins, otherwise you all lose.