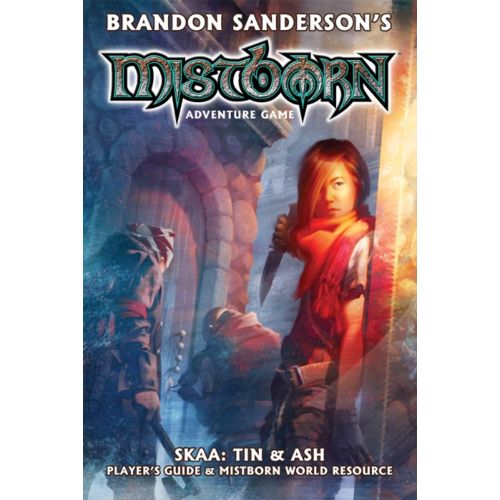 Skaa: Tin & Ash is an essential supplement for the Mistborn Adventure Game, designed for players, Narrators, and fans of the Mistborn novels. Lees meer

The Final Empire was built on the backs of the skaa — the downtrodden descendants of those who opposed the Lord Ruler’s ascension a thousand years ago. They are the faceless masses of Scadrial, tasked with plowing the barren fields, sweeping the ash-covered streets, tending the opulent nobility, and serving at the whims of their “betters.” But a few skaa cast off the chains of their destiny to be something more. They are thieves, Allomancers, firebrands, and rebels. They fight the system of oppression and brutality to give their people something they lost long ago — hope.

Skaa: Tin & Ash is an essential supplement for the Mistborn Adventure Game, designed for players, Narrators, and fans of the Mistborn novels. Developed in cooperation with Brandon Sanderson, this guide expands the canon of the novels, providing new insights into skaa throughout the Final Empire. Inside you’ll find detailed information on the history and beliefs of the skaa; the lives of city, canal, and plantation skaa; the skaa criminal and political underground; and famous skaa such as the Citizen, Mare, and the Survivor of the Flames.

For players of the Mistborn Adventure Game, there’s a bounty of new rules for creating and playing your own skaa Hero, including new Stunts, equipment, Networks, and locations to explore and liberate.

Also included is an epic adventure, Beasts of Burden, set in the black heart of the skaa criminal underworld. An old friend has gone missing in the slums of Luthadel, and you have been hired to find him before it’s too late. As you close in on the truth, you find yourself and all you hold dear under assault from all quarters by a shadowy syndicate. What is this foe protecting, and how will you strike back? Your very survival hangs in the balance…