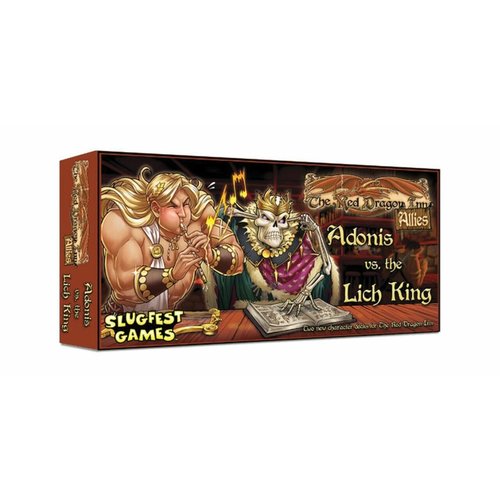 Expand the Red Dragon Inn party with a cocky new bard and a diabolical new mage in Adonis vs Lich King. Lees meer

Expand the party with a cocky new bard and a diabolical new mage!

The Magnificent Adonis, Bard of the Ages

This bard’s pretentious title (self-given, of course) makes him the envy of other bards… Okay, not really, but he can carry a tune and he’s good in a fight. He uses his three preferred instruments, the flute, the lyre and the drum, to cast bardic magic or just bash bad guys over the head!

The Good: Adonis is a fine specimen of a man.
The Bad: … and he won’t let you forget it!

Look over there! It’s the Lich King! This ancient skeletal mage has transferred part of his essence and power to his severed hand, making him highly resistant to attack by the good guys. But even this near-immortal embodiment of evil enjoys a pint at the tavern once in a while!

The Bad: Good luck getting past his formidable defenses.
The Worse: He knows how to “throw a punch.” Literally.