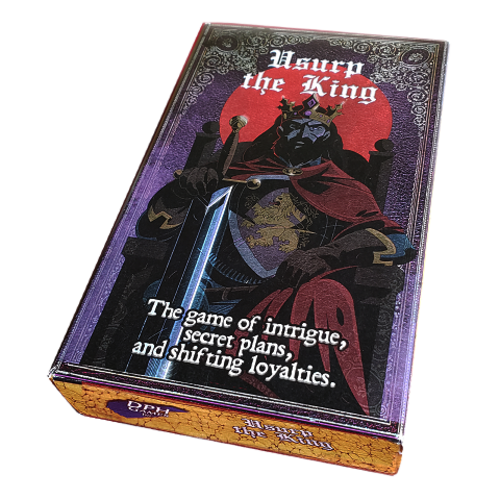 In Usurp the King, you play as one of five dominant families in the Kingdom. Use daggers, bribery, and conspiracy to vie for power! Lees meer

The King may be in trouble. The court that surrounds him contains subjects who seek power. Each player represents a family that will vie for control over the court members. Featuring seven victory conditions, the path to victory may shift as you gain more information about each court members’ motives and those of the other families. Your allegiances will twist and change based on your interests. The King’s subjects are but mere pawns.

In Usurp the King, you play as one of five dominant families in the Kingdom. Use your influence to back the person that you believe will be in power when the dust settles. As the game evolves, you may find that who you are supporting changes. Daggers, Poisons, Conspiracy, and Bribery are only some of the tools at your disposal.

Play in Usurp the King occurs over two phases. Usurp is packed with moves and counter moves. In this 20-minute game, so much can happen in such a short period!

Intrigue phase: Players take turns placing Leverage cards around the courtroom. Families will give the appearance of support or disapproval. A dagger may be placed on a court member giving the illusion that you would like to eliminate them. But you have a plan to move the dagger to another court member. However, other player’s spies may move your dagger to a court member you care about, and suddenly your priorities change!

Scoring: Determine which Court Member becomes King. The family with control of the new King is victorious.