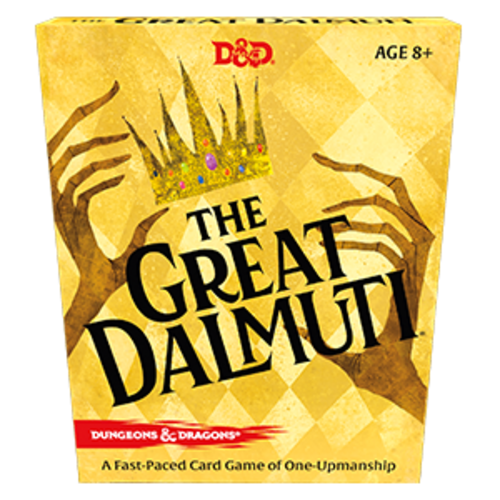 D&D-themed version of The Great Dalmuti, a light card game where players gain status by going out first and the winner takes it all! Lees meer

In the Dungeons & Dragons Roleplaying Game, the dice may control your fate, but in The Great Dalmuti, it’s about how cleverly you play the cards you’re dealt. One round you’re polishing your royal crown, and the next you’re whacking rats in a filthy alley. It’s a gloat-filled, winner-take-all contest in this D&D-themed version of the classic card game.

A light card game where players gain status by going out first.

The 80-card commercial deck contains cards ranked from 12 to 1, along with two Jesters. Each card bears a number, which is not only its rank, but also tells you how many of that card exist in the deck. In other words, there are twelve 12s, eleven 11s, four 4s and a single card ranked 1. The lower the number, the better the rank.

The deck is dealt out to all players and the object is to get rid of your cards as fast as possible. The hand begins with one person playing one or more card to the center of the table. The cards played must all be of the same rank (although Jesters are wild, and may be played with any other cards). Each player in turn must now either play the same number of cards of a better rank, or pass. Play continues around the table until everyone has passed; at that point, the cards are cleared and whoever played the last set of cards leads the next round. After everyone has gone out, the players are ranked. For example, the person who first got rid of all his cards becomes The Great Dalmuti. Players change seat position to represent the new hierarchy and begin another round. The Great Dalmuti is generally played for many rounds.