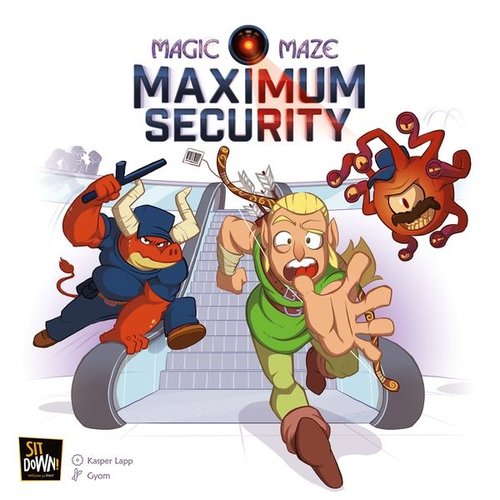 Magic Maze The Maximum Security expansion not only brings the mall guards of Magic Maze to life, but provides a number of other modules to allow you to customize your experience. Lees meer

Magic Maze has been regularly robbed by unscrupulous adventurers, who incessantly steal from the same four shops. How strange! Due to this alarming observation, Management has installed new security systems to dissuade any further dishonest deeds.

The Maximum Security expansion not only brings the mall guards of Magic Maze to life, but provides a number of other modules to allow you to customize your experience. There are two different types of modules: helpers and challenges, which decrease or increase the difficulty. You will be guided step by step through all of the modules, and each of them comes with a tutorial that will help you practise the new rules before adding it to your "real" games of Magic Maze.

Helpers:
- Ventilation shafts: the dwarf can open ventilation shafts for all the heroes to move quickly from one end of it to the other.
- Wall breaches: the barbarian can breach the walls of the mall for all the heroes to move through it.
- Spells: the mage can cast 2 spells among 10 available, with instant or temporary effects.
- Telekinesis: the elf can move Mall tiles around
- Anti-stress tokens: you can use them at anytime to allow a discussion, swap Action tiles or flip the sand timer.
- Maps & Auto-explore spaces: explore the mall much quicker!
- Control room: use that special space to send the guards to Vortex spaces.

All of these modules bring in more options to make Magic Maze a more intense and puzzling experience.