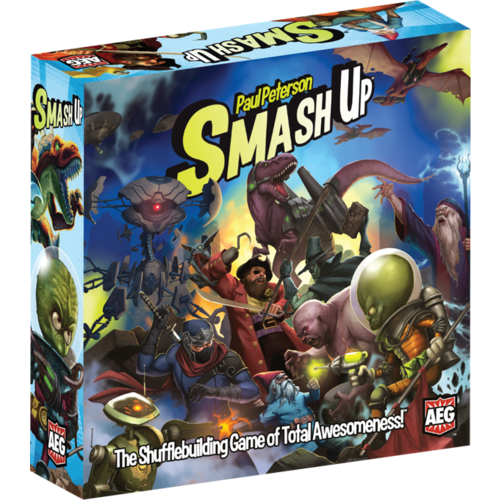 In Smash Up each player takes a 20 card deck from two factions and shuffles them together to form their deck for the game. Lees meer

In Smash Up each player takes a 20 card deck from two factions and shuffles them together to form their deck for the game. Each faction has their own strengths and weaknesses and combining them together can end up with some funny results. Ninja Dinosaurs anyone…?

Each combination plays very differently than the others. With eight different factions in the standard box there is a lot of opportunity for different combinations and gameplay styles in the base box.

The aim of the game is to get victory points. These are achieved from smashing bases. Bases have different amounts of health and are defeated when the total health of the characters on the base exceeds the health of the base. At that point the base is smashed and victory points are awarded. Some bases also have special effects which take place after they are destroyed.

The points are awarded based on the amount of health of the creature each player has at a base. Although all creatures on a base count towards the health total for defeating it, in a four player game, if you are the player with the least health of creatures at the base you receive no points. But if you focus too much on one base your opponents may score easy, uncontested points.

So, in Smash Up, you are not only trying to smash the bases, you are also trying to defeat the characters of other players, so you have the most health at a base. This is either done through direct actions where your characters attack, or indirect powers. These can sometimes be chained together which leads to some very fun and intense gameplay.

There are several expansions for Smash Up, ranging from a “pretty pretty” box to a “monster smash” box. These add more factions for even more smashing fun!