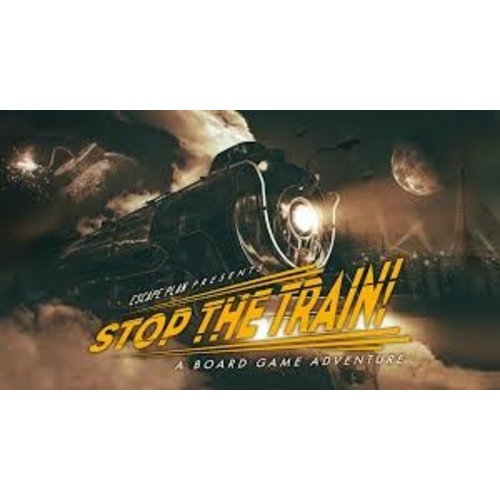 Stop the Train is a semi-cooperative, social deduction board game. Players have two missions:
Stop the Train! & A character-specific objective. Lees meer

Narrative: The 19.05 to Paris is armed with a bomb and hurtling towards its destination threatening civilian destruction. On board, the passengers (10 different characters) must work together to Stop the Train.

Stop the Train is a semi-cooperative, social deduction board game. Players have two missions:
Mission 1: Stop the Train!
Mission 2: A character-specific objective
To win, players need to complete both missions.

But! There's a saboteur in your midst hellbent on crashing the train, trying to secretly speed the train up at every turn without raising suspicion. The players must put their social deduction skills to the test by collectively identifying the Saboteur to regain control of the train.

The train speed is controlled by a speedometer which is impacted by the cards that are laid by each players called Effect Cards. The gameplay is accented by dramatic interventions, votes on route taken and emergency meetings where players can be thrown off the train. If the players can exhaust the deck of Effect Cards, the train runs out of steam. Otherwise a collision is caused and the game is lost and the Saboteur has prevailed.