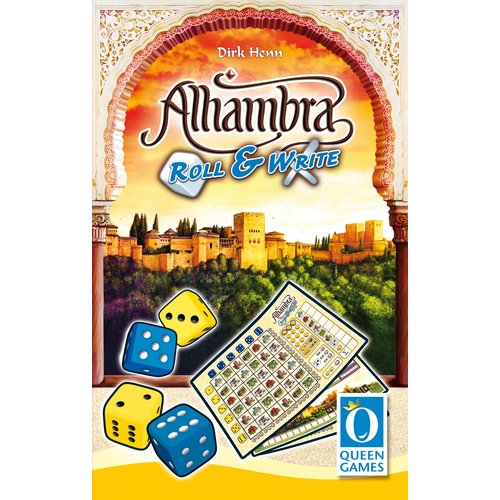 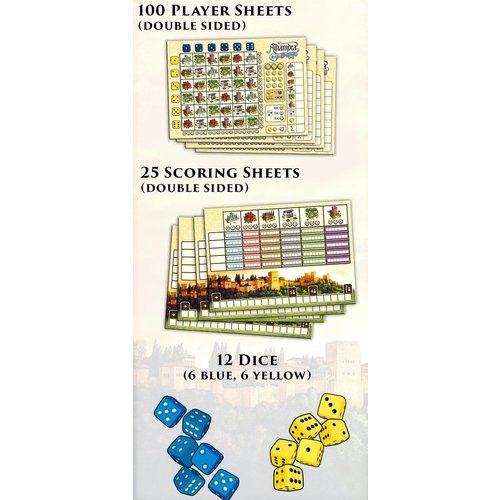 Alhambra: Roll & Write is a dice version of Alhambra where players select sets of dice to try to build the most of each type of building. Lees meer

Alhambra: Roll & Write is a dice version of Alhambra where players select sets of dice to try to build the most of each type of building.

Players start the game by rolling a blue and yellow die three times and crossing out the building at the intersection rolled numbers. Each time a player "builds" (crosses off) a building, it is marked on the separate scoring sheet so that all players can see how many of each building have been built. Then, each player rolls the dice one more time and places their blue and yellow dice on their player sheet on the appropriate numbers.

Then, the start player rolls another set of dice. They may either choose one building which has not been built already and cross it out (and indicate it on the scoring sheet), or they may take one coin for each intersection which has already been crossed out (up to four coins).

The two dice that are not used are passed to the next player (the numbers are kept the same), and the two used dice are re-rolled and put back on the player sheet with the new numbers.

Coins can be used to re-roll dice (1 coin) or to mark out both buildings (3 coins). At the end of the game, 1st through 3rd place for each building type is awarded points, as well as bonus points for completed rows and columns.