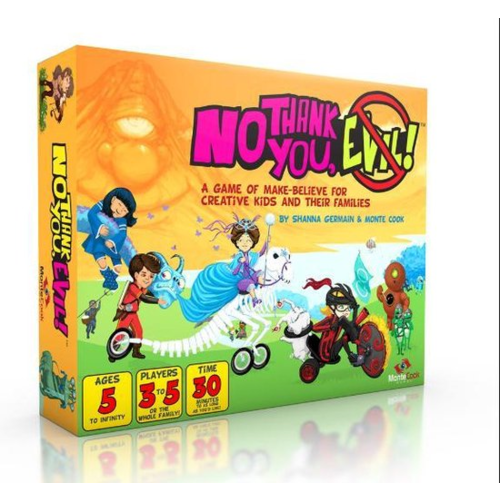 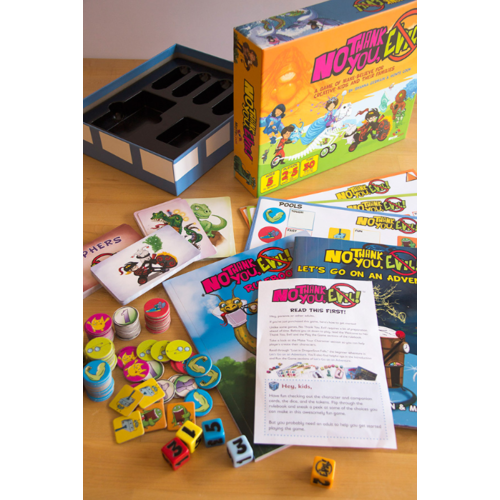 No Thank You, Evil!

Olivia is a Super Smart Princess who Experiments with Science. Rowan is a Cool Robot who Loves Ooey Gooey Things. Their best friend tells them that a dragon has stolen all his chocolate coins. They’re the only ones who can enter Storia and save the chocolate—how will they do it? It’s all up to them!

No Thank You, Evil! is a tabletop game of creative make-believe, adventure, and storytelling. In No Thank You, Evil!, each player creates a character based on a couple of cool, descriptive, imagination-firing traits. The Guide (a special role often played by a parent or older sibling) presents a dilemma, and the players set off on an adventure of the imagination. Along the way they use their character’s special skills, companions, and equipment to overcome obstacles. Maybe you’ll rescue a friend from Dragonsnot Falls, save the world’s biggest adventure park from an ancient curse, or fix Whizbang’s broken time machine before it’s too late! Whatever you choose, you’re sure to solve mysteries, gain friends, confront bad guys, and have a wild adventure!

Whereas conventional board games constrain players’ actions, No Thank You, Evil! sets kids’ imaginations free: Their options are limited only by their creativity. Together, the players create a story as they work together to make their way through the adventure!