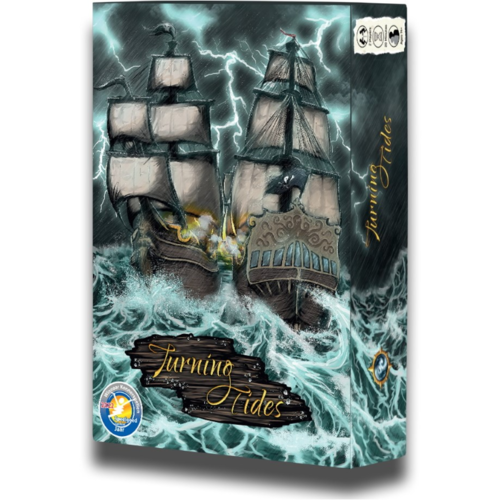 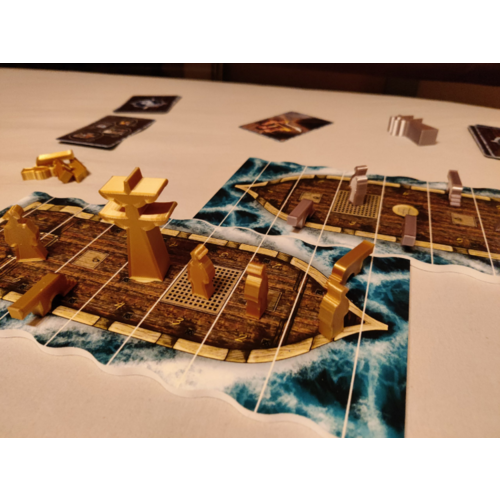 Turning Tides is a suspenseful two player board game that will keep you guessing about every move your opponent might make. Lees meer

Slowly two pirate warships approach each other in deep waters, mere miles from the harbor, and it becomes clear that the pirate code will not be honored today. The Private, a conquered British flagship, as well as El Bueno, a captured Spanish frigate, raise the 'Jolly Roger' to signal that they will show their rival no mercy. As the waves grow restless, the circling seagulls are waiting patiently for that inevitable first shot.

Each round, you and your opponents boat will sail past each other in order to try and take each other out of the battle. You will have to position your crewmen and cannons tactically to do as much damage to the enemy boat as possible, all the while trying to avoid your opponent from doing the same to you. Aside from that, you have your captain to think about. Losing them will mean giving your opponent the upperhand. Both players will play their cards simultaniously throughout the game, which means both of you will be in the middle of the action the entire time.

Only a player who has the patience to wait for the right moment to strike, will be able to turn the tides of this epic two-player game. How will you sail the waves, captain?